Last November I attended the Essential Director Update for 2017, hosted by the Australian Institute of Company Directors (AICD). The event informs members of critical changes to governance, business and regulatory landscapes in the last year, that impact director duties and responsibilities. The AICD also provides this update in print – the AICD Essential Director Update.

The keynote speaker for the event was company director, Graham Bradley AM, who, amongst the update, highlighted a rundown of five issues that will dominate the Director agenda in 2018.

With four workplace deaths, on average, each week in Australia, the AICD event got me thinking about what I would want directors to know about in terms of critical workplace health & safety matters in 2017 in the governance, business and regulatory landscapes that will have an impact on how they fulfil their governance and leadership role.

This is the premise of this post and the FREEBIE I’ve included: the 2018 Director Health & Safety Dashboard (the Dashboard). Health & safety 2017 in review, including a collection of health & safety matters that will no doubt feature on any director’s health & safety radar in 2018.

This inaugural 50-page report was written with a Director audience in mind, to assist them in knowing what to ask, and when to act, to truly lead safe & healthy work in the boardroom.

Download your free copy of the 2018 Director Health & Safety Dashboard below.

If you’re short on time, I’ve summarised six significant topics from the report. 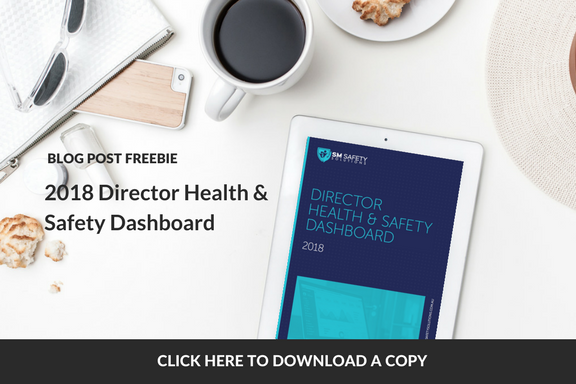 Perhaps the biggest regulatory change in Australia in 2017 was the introduction of Industrial Manslaughter in Queensland (as an amendment to the Work Health and Safety Act 2011 (Qld)).

The amendment was in response to two catastrophic workplace fatalities incidents – at the construction site at Eagle Farm Racecourse and on the Thunder River Rapids Ride at Dreamworld Amusement Park.

Of the five changes summarised by lawyers Clyde & Co., which I’ve outlined in the Dashboard, the two most relevant to directors are the introduction of the role of a senior officer and the mandatory codes of practice.

It will be imperative that senior management determine who may be considered a senior officer, similarly to what they would have done when workplace health & safety legislation introduced the role of an ‘officer’. This is so that the senior officers understand their role in legislation and can effectively implement practices to support their obligations. Governance frameworks may need to be revisited to ensure they capture any individuals not considered an officer under WHS legislation.

While not all agree that Queensland needed industrial manslaughter provisions, for reasons that include the current workplace health & safety legislation has severe enough penalties, there has been a global rise in manslaughter and serious criminal charges arising out of workplace safety incidents, including Australia, the U.S.A and UK.

In terms of mandatory codes of practice, organisations in Queensland should consider conducting a gap analysis against relevant codes of practice and their health & safety management system – many organisations would be surprised of their lack of compliance against the Codes if they have not undertaken such an activity in the past.

The Harvey Weinstein scandal has sparked an international conversation about sexual misconduct and even created one of the most popular #hashtag campaigns of all time (#metoo).

The damage has ruined lives, careers, and one can assume contributed to mental health issues on both sides – both victims and those accused.
As reported by the AICD, the concern for directors is a significant blow to the organisation’s reputation in the eyes of customers, investors and the community — and potentially their own reputation by association.

In a study by Mississippi State University, it was found that companies experience an average shareholder loss of $US 226 million ($284.7m) in the three days after an announcement of a CEO indiscretion.

The recent Australian cases have sparked discussion about the role and responsibilities of boards in these matters. More to come on this topic for sure in 2018.

A research paper published by Safe Work Australia suggests health & safety due diligence training for most company officers has to date focused on legal exposure and has failed to inform this group of a general understanding of health & safety.

The paper also found that Directors are not adequately trained in how their decisions influence health & safety outcomes, or that health & safety performance data is generally inadequate for effective decision-making.

Even more importantly, this group may be missing out on using health & safety as a lever for business excellence.

Certification of Generalist OHS Professionals/Practitioners is already standard practice in countries such as the USA, Canada, the UK and Europe; however, Australia has lagged behind in implementing such a Certification scheme.

In the broader field of workplace health & safety, a generalist applies to those providing general OHS advice and support. The Generalist title is commonly used to distinguish the profession from specialist roles such as occupational hygienists and ergonomists.

Through my discussions with directors and executives, there is a growing question from this group as to whether the person providing health & safety advice has the appropriate skill set and expertise.

It’s not surprising that this issue has surfaced amongst this group, particularly in Australia and New Zealand, where officers have a legislative due diligence obligation to ensure their reliance on an ‘expert’ is reasonable.

The Safety Institute of Australia (SIA), the representative body for Generalist OHS Professionals/Practitioners in Australia, has been working with international bodies to implement a certification program, including ongoing professional development. The SIA has defined three levels of health & safety advisors and I look at these further in the Dashboard.

The 2017 Edelman Trust Barometer, an international study of trust levels in institutions, revealed the largest-ever drop in trust across the institutions of government, media and NGOs. Of particular interest is the drop in CEO credibility to an all-time low.

Additionally, the average person is now just as credible a source of information about a company as is a technical or academic expert, and far more credible than a CEO and government official.

These findings are important for directors and the executive team to consider when communicating their health & safety message.

The absence of trust in management from the workforce, has the potential for workers to avoid advising management of health & safety issues or incidents.

For example, workers may look to tell management ‘what they want to hear’ to avoid repercussions or continue doing work unsafely because they know management will do nothing about the issue. This results in a skewed picture of how well the organisation is managing is risk and therefore little traction for the organisation in terms of their health & safety initiatives and overall performance.

From a broader organisational perspective, the board and management should look to get a clear picture of where their organisation’s management team and board members sit on their own trust barometer.

Many of us can vividly recall hearing of the UK Grenfell Tower disaster in June 2017. Like many of us I watched the footage in complete dismay, shocked at how a building fire could cause so much destruction in such little time.

As a result of the Grenfell fire, an Independent Review of Building Regulations and Fire Safety was initiated with a particular focus on its application to high-rise residential buildings.

A wide range of issues have been included in the inquiry, including governance and management issues. Of particular interest for directors globally, is the issue of ‘whether there had been any previous fires in the building or in similar buildings that should have put those with management and those with governance responsibilities on notice, and if so, should they have applied any lessons learnt’ to the Grenfell Tower.

It is imperative for Directors to be familiar with health & safety matters inside and outside their organisation, so they know what to ask and when to act, and not repeat similar issues where possible.

Australia experienced a similar building fire, without the loss of life, in 2014 at the Lacrosse Tower in Melbourne’s Docklands precinct where aluminium cladding caught fire and raced up the building in just 15 minutes. As a result, the Senate Inquiry was launched into Cladding Materials (specifically aluminium composite cladding).

The Senate Committee received its interim report on 6 September 2017, and recommended a total ban on the importation, sale and use of polyethylene core aluminium composite panels (note the recommendations were rejected by the Australian government in October 2017).

The presence of aluminium composite cladding on a building does not mean it is non-compliant or a safety hazard, the configuration and how it has been used is also relevant. The final report is due in April 2018.

When thinking of human rights abuses, it’s hard to forget the reputational damage inflicted on Nike post-admitting in 2001 that it “blew it” by employing children in Third World countries.

It is also fair to say that most consumers do not wish to inadvertently contribute to human rights abuses through modern slavery, through their purchasing of goods and services.

Nike was not the first or the last company to be exposed in the media for human rights abuses, and Seyfarth Shaw Australia suggests that 2018 looks to be a landmark year in the worldwide effort to eliminate modern slavery, with an expanding legislative and regulatory focus on the domestic labour practices and global supply chains.

This is the basis of the latest change in Australia with regard to human rights.

The Joint Standing Committee on Foreign Affairs, Defence and Trade, in its inquiry into establishing a Modern Slavery Act in Australia, produced its final report in December. The report sets out 49 recommendations, including the introduction of an Australian Modern Slavery Act and the establishment of an Independent Anti-Slavery Commissioner.

Now, I’d love to hear from you:

What do you think are some of the top workplace health and safety issues or matters from 2017 that directors need to have on their radar in 2018?

Remember, share as much detail as possible in your reply. Your story and/or thoughts may lead to someone’s meaningful breakthrough and it all contributes to this audience knowing what to ask, and when to act.

Important: share your thoughts and ideas directly in the comments. Links to other posts, videos, etc. will be removed.

Thank you so much for reading and adding your perspective to the conversation!

I teach board members and executives how to lead with heart and put people first, by leading safe & healthy work. Stick around and I’ll share with you the skills, knowledge and mindset you need to know what to ask, and when to act and lead with confidence.

Let us know what you have to say:

Want to join the discussion?
Your email address will not be published.